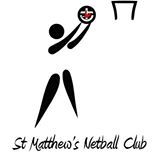 Are you interested in playing netball?
Looking for a competition that’ll let you play with your friends?

St Matthew’s Netball Club is part of the Gooden Reserve Netball Association. We’re a local club in the Hills District that has been running for the past 40 years.

Our competition caters for girls from Year 2 at school through to adults. We also accept boys up to the age of 12. For girls in Kindergarten and Year 1 at school, we offer a skills program called Fun Net. Our Opens division (post-high school) has many teams of mums who are returning to netball or are first-time players.

Our season runs from ear April to end of August, concluding with a Gala Day for all players. Games occur on Saturdays between 12pm and 4pm at Gooden Reserve netball courts. Training can occur Monday to Thursday afternoons depending on coach and player availability, also at Gooden Reserve.